Remember my short film Unplanned? Well, I went and  adapted that into a wee short play. It’s a shame it wasn’t a musical, because Unplanned:The Musical has a better ring to it:

“Girl, you gotta abort that fetus,

And we’ll have more money to feed us.

I can’t raise no baby,

I’ll pull out next time, maybe”

It would’ve been a Broadway hit.

Anyway, aye I adapted it into a play. Synopsis is the same: young couple have an unplanned pregnancy, he wants to keep it, she doesn’t, big debate ensues. However, in the play it is confirmed that Katie and Robbie go through with the termination. They have this big debate, please let me keep it etc etc, and it finishes on a monologue delivered by Katie addressing the unborn child. She begins “That’s what I should’ve said” and continues to give her reasons why they didn’t keep it, and the regret she feels. Ultimately, she knows it was the right thing to do, but they’ll always be that nagging “what if?” thought.

It was probably the most emotional thing I’ve done to date. Mainly because it was based on my own personal experience. Yeah that’s right, I had an unplanned pregnancy and went through the mad debate about what to do. Just like Katie, I decided termination was the best choice for us. It deffz was, but shit. It was a tough one.

I wanted to write this so that the audience can experience just how difficult a choice this can be. It’s not a simple yes or no, and I think there is a lot of stigma still attached to terminations. I believe some people still consider it to be taking the easy route, a way to just do what you want without facing any consequences. A kind of “fuck it, it doesn’t matter, we’ll just get rid of it” type attitude. And whilst these attitudes do exist, it is not the same for every case. It’s a fucking rollercoaster. Jumping between yes, no, unsure, oh for deffz, no I couldn’t. It’s a nightmare. I wanted to bring that issue to light, and also to challenge myself.

Putting yourself out there was terrifying. I mean, I wrote it and acted in it (usual) so I was all types of exposed. But it gave me a shit load of confidence in my ability as a writer and a performer and I’m mad happy with it. I would like to go back and develop it some more, but for now, it’ll do.

Here’s us backstage, just before the big debut. Aren’t we cute? 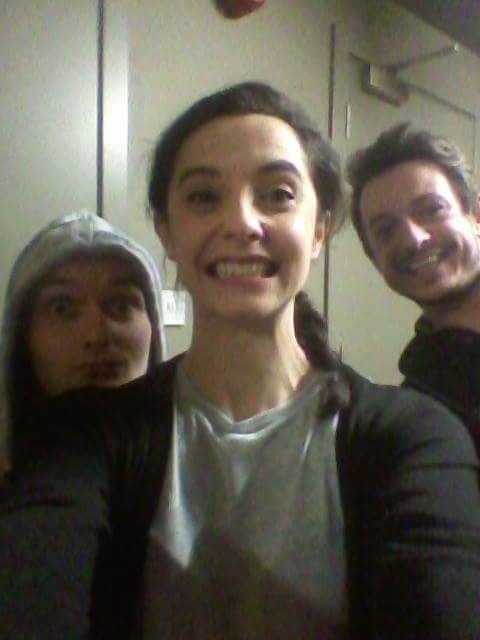 One thought on “Unplanned: The Play”