I’ve never done one before. I’ve never even done like a ten minute set at an open mic. So naturally, for my first time, I’ve decided to do an hour. Like a big, ambitious idiot. It’ll be fine though. I’m hella good at writing and performing so what could go wrong?!

So…eh….what’s this show about then, hen?

My new show is called “Don’t Talk To Me About Love” and is a one woman (did I mention that?) comedy show about love, sex, mental health and Vanilla Ice. It’s basically a stand up, but I’m not calling it a stand up, even though it is hilarious. But yeah, it’s me talking about life with borderline personality disorder and how it has affected my relationships and my attitude towards love. But in a hysterical way. You’ll be laughing in the aisles- lol lol lol ha ha ha. Just like that.

I finished writing it yesterday and had a run through to see how it flowed together, and also to see how long it lasts. 57 minutes. That’s SO LONG TO BE TALKING!! My mouth was super dry by the end of it, even though I was chugging water like a big thirsty elephant. I’m gonna have to have about 6 pints of water on stage with me. And a pee bag or something because I can barely hold my bladder as it is. Maybe I can have flash cards or a powerpoint or something. For this next section, please just read it off of the screen whilst I run to the toilet. That could work. OR I can have a super immersive show where people will follow me to the toilet and I’ll keep talking as I’m piddling, and they all just hang out at the sinks. OR I’ll just not piss myself. There are plenty of options.

I’m debuting “Don’t Talk To me About Love” at The Hug and Pint on Sunday 14th July.  I’m excited. Nervous, but excited. I’ve also got two comedians who actually do do stand up as support acts- Hannah Rachel Cruickshank and Amelia Bayler. They are actual stand ups with shitloads more experience than me, so you know, the first half will be great!

But please stick around for the second half. Please don’t leave me half way through. Please.

Anyway. Come. It’s free (bucket at the end though, so bring shitloads of cash to throw in it. I want to bathe in £50 notes.) 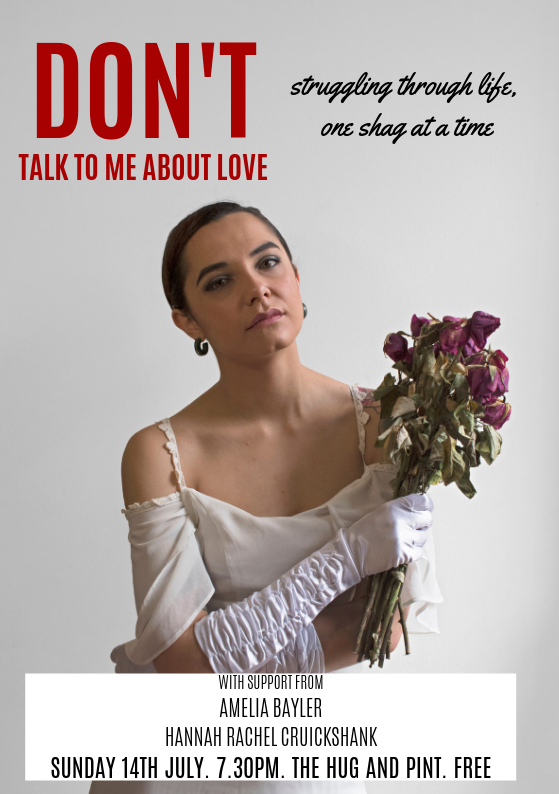